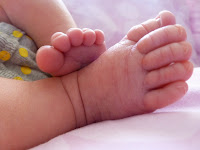 "When it came time to announce our pregnancy, we decided that we just wanted to come forward and tell the truth. We felt it was such a miracle that we were even pregnant that this child, and this process, deserved our honesty. So we told everybody. I took Truvada for a year and a half - and it worked."

A year and a half ago, My PrEP Experience featured a story from an HIV-negative woman, who we will call "Poppy", married to an HIV-positive man. The sero-discordant (magnetic) couple wanted to have a baby, and after a journey investigating various options that lasted more than a decade, Poppy chose to take Truvada as PrEP, to protect her from contracting HIV while still allowing her to conceive. 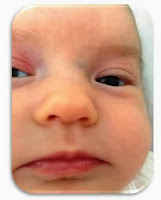 She stayed HIV-negative and got pregnant. Check out those toes up left - and that cute little mug to the right - to see the result of that pregnancy.

In this recording, Poppy tells her very compelling PrEP experience - from the beginning to a beautiful baby daughter, with features and characteristics from both her parents. Please take a few minutes to listen.

The recording is actually an excerpt from a webinar conducted on October 28, 2013 called "PrEP-ception: Sero-discordant couples using PrEP to reduce HIV transmission risk during pregnancy."
This webinar, the second in a series of webinars by the US Women and PrEP Working Group, discussed the possibilities and challenges associated with serodiscordant couples using PrEP to help them achieve pregnancy safely. In addition to a Q&A period, the webinar consisted of the following: