Derek Brocklehurst - A Year on PrEP, That's All He Wanted


After taking PrEP for one year, I found the love of my life and decided to give monogamy a try.

I started PrEP (pre-exposure prophylaxis) in October 2011. I was presecribed Truvada "off label" before it had actually been approved for PrEP by the FDA (Food and Drug Administration.) FDA gave its approval in July of 2012. 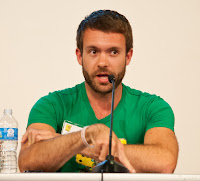 I had an honest, open-ended discussion with my Nurse Practitioner and, without any judgment on his end regarding my frequent condomless sex practices, he said, "You would be a great candidate for this medication."

It was covered 100% by my insurance, and Gilead also offers co-pay assistance programs to cover the co-pay of the medication if you are prescribed it, so I literally paid $0 for this potentially pricey preventative.

I had zero side effects during the year I took it, and it gave me peace of mind. I was very open about my condomless sex practices with many multiple partners and, along with seropositioning, I believe it has contributed to helping to keep me HIV negative.

I think stigmatizing anything in our community is not the way to go, so PrEP should be just another option out there to help negative guys stay negative. It's also important to get regular (every 6 mos-1yr) kidney function tests to make sure it's not doing long term damage to your kids, as well as bone density tests and evaluations.

After taking PrEP for one year, I found the love of my life and decided to give monogamy a try. I stopped PrEP after just one year of daily adherence (I really never missed a dose! Every morning.)

It's always important to re-evaluate where you are at in your sexual life. If PrEP makes sense, talk to your provider and get on it! If it doesn't make sense to be taking a daily anti-viral medication that could have long term effects on other body systems, reassess and move on. I have found that honesty and communication are the best policies in any relationship: be it with my provider, my friends, or my primary lover.
Posted by NewPrevTech at 8:44 AM 8 comments: 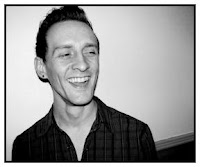 Posted by NewPrevTech at 3:43 PM No comments: 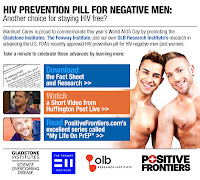 Posted by NewPrevTech at 8:00 AM No comments: 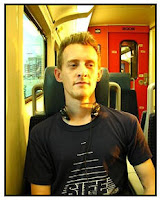 Posted by NewPrevTech at 8:17 AM No comments:


Despite our best efforts to prevent new infections, more than 50,000 people in the U.S. are infected with HIV every year as reported by the Centers for Disease Control and Prevention (CDC). We know that young ( aged 21-35) gay, bisexual or other men who have sex with men are becoming infected more than anyone else. This is especially true among young men of color. While condoms are effective in preventing HIV, we know that people don’t always use them. For that reason we are trying to find new ways to prevent HIV. Next-PrEP is a study using three drugs to prevent HIV in HIV negative people; this is known as pre-exposure prophylaxis or PrEP. The idea behind PrEP is that if an HIV-negative person takes certain pills on a regular schedule before they are exposed to HIV through sex, they may be protected from getting HIV infection.

We know that two of the drugs that will be used in this study are safe for people who are HIV positive. However, we want to see if they are just as safe and easy to tolerate in people who are HIV negative. This will be the first study to see if the drug maraviroc is also safe and tolerable when used by HIV-negative people as an HIV prevention strategy. We will test four different combinations of medications.

This research project is funded by the U.S. National Institutes of Health through the HIV Prevention Trials Network and the AIDS Clinical Trials Group.
Posted by NewPrevTech at 1:00 PM No comments: