Today, after a great deal of advocacy, planning, and preparation, the HIV Prevention Trials Network (HPTN) has begun the process of screening men for potential enrollment in the landmark study, HPTN 073. 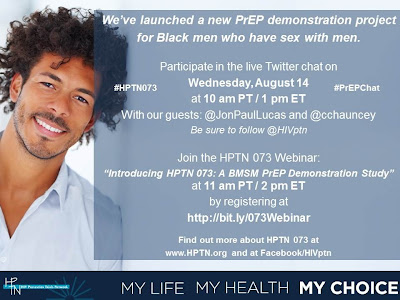 HPTN 073 is a demonstration study evaluating pre-exposure prophylaxis (PrEP) Initiation and adherence among HIV negative Black men who have sex with men (BMSM) at three of the HPTN’s United States research sites.

There is a Twitter chat scheduled for Wednesday, August 14, 2013 to learn more. The event will start at 1PM ET with the chat hosted on HPTN’s @HIVptn Twitter page. That same day, at 2PM ET, there will be a webinar on this topic as well. Register for this free webinar here.

You can also read the fact sheet on HPTN 073 embedded below.

(Part One) Can gay men involved in HIV work ever imagine using PrEP?

via Positive Lite, by Marc-André LeBlanc


In this article, I focus on whether gay men involved in HIV could ever imagine using PrEP. In my next article, I will focus on their concerns and hopes for PrEP. This article presents gay men’s opinions about PrEP. It does not claim to present facts about PrEP. As such, factual errors might be included in the opinions expressed, so check out the resources listed at the end of the article for more information about PrEP.

These are all gay men that I know, so they are mostly from Canada. Many people would have different answers, I imagine—gay men in other countries, gay men who are not involved in HIV, and people other than gay men. But since the guys I asked are more likely than most to know about PrEP, I was curious to know their thoughts.

I was quite amazed at the response—half of the 60 people I approached responded to my brief three question online survey, including 17 HIV-negative guys and 13 HIV-positive guys. I told them they could respond anonymously or let me know that they had responded to the survey. Among the 30 guys who responded, 19 agreed to have their names mentioned (see below). I have no way of knowing who wrote what unless they included identifying information, which in any case I have removed from this article.

Originally, I had grandiose plans of distilling their thoughts, outlining the key themes that emerged, and using a couple of quotes here and there to illustrate those themes. However, my plans changed once I read the responses. These guys were so articulate; I decided the best approach was to let them tell their stories in their own words. So this article is almost entirely made up of quotes. As far as I’m concerned, it reads like a storybook read to me by 30 guys I love and admire very much. I hope you agree.


Here is what I asked, and how guys responded.

My question to HIV-positive guys: “If PrEP had been available when you were HIV-negative, do you think you would have taken it? Why? Why not?”
The guys who responded were evenly split—half said yes, half said no. A couple of guys didn’t know. In fact, a few guys said that thinking back, it was really hard to know whether or not they would have taken PrEP.
“Yes. It could have prevented me from becoming infected.”
“Probably yes, given some of the risky sex I was having at different periods in my life.”
“Since this was [over 20] years ago, I'm not sure. I was very successful with condom use at the time so I think it was a very different environment. If you changed the situation to today, I think (to the extent any long term survivor can imagine being HIV-negative) that I would use Truvada for PrEP periodically.”
“It is hard to look back and think ‘Oh, I would have done X or Y.’ How does anyone REALLY know? I would LIKE to think I would have considered it, especially since the time I seroconverted was in the context of a relationship where/when we stopped using condoms. We never discussed the fact that the condoms ‘disappeared’, but having had PrEP available, AND on my radar, it may have appealed to me—or at least gotten me thinking more about the absence of condoms from my sexual behaviour.”

Posted by NewPrevTech at 10:38 AM No comments:

Here is our first update.

• United Healthcare (commercial insurance): Prior authorization required, consistent with indication on label, triggered when Truvada is prescribed without a third agent or in the absence of code for HIV infection (see pictures above)

Questions, concerns, or clarifications - send email to myprepexperience@gmail.com
Posted by NewPrevTech at 9:11 AM 2 comments: