Michael - "Without the constant fear of HIV infection, I can engage in sex with the love of my life." 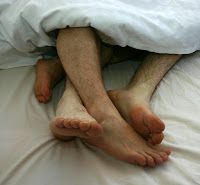 I take the medication every morning (on an empty stomach – I’m not a breakfast person). And yet, no side effects – except one: I no longer have the deep seated anxiety I would have after a sexual encounter.


The theme here is perseverance.

I’m a gay man involved in a very long term relationship with the love of my life (over 20 years together). But, we are not without our difficulties – and being men, and being men who grew up gay in a time when that wasn’t accepted, discussed, or even acknowledged, our stresses often lead to using sex as an outlet – and not necessarily in a healthy way.

The impact of growing up as we did can lead, let’s just say, to difficulties with monogamy.

And, as I believe any honest man – gay or straight – will admit, being ‘safe’ is a difficult, stressful goal. And, even when you are ‘safe’ you always wonder . . . was I safe enough?

The long term stress of that single question can ruin a relationship, take years off your life in worry, and even lead to patently unsafe sexual activity (trust me on that, okay?) And so with all these tensions – further complicated because of the impact (real and imagined) on my relationship with the love of my life – I found myself tracking the development of HIV and AIDS medications over the last 30 years. It was that knowledge that led me to seek out PEP (post-exposure prophylaxis) once, about 7 years ago, after a particularly self-destructive bout of unsafe sexual activity (it is amazing what the confluence of job dissatisfaction, and financial difficulties can lead one to do!)

And so, following the development of new drugs, I learned that that is a medication (Truvada) that can reduce my chances of contracting HIV by better than 90% - ninety percent!?

Are you kidding? Why the hell isn’t this common knowledge?

I suspect the answer to that question is wrapped up in the same nonsense that led to the fact of the disease not making the news when it first broke back in the ‘80s. But, suffice it to say that there is medication that can significantly reduce the chance of HIV transmission. And, armed with that knowledge, I reached out to my physician.

You would think that living in a suburb of New York City would entitle me to physicians who are up to speed on matters such as HIV prevention. But, no. I first discussed the fact that I wanted to begin PrEP in November with my general practitioner. At first she wanted me to see an Infectious Disease specialist and freely admitted that she was not up to speed in PrEP. I offered to provide her with materials that should provide her with basic knowledge.

I was unable to locate an ID specialist in my area who was a participating insurance provider, plus normal human procrastination set in. When I saw my physician next I was armed with material from the Centers for Disease Control. However, my physician was still reluctant to write the prescription. I next checked out the Westchester County Health Department’s website and found a program dedicated solely to HIV and AIDS issues (check them out: The Hope Center at St. John’s Riverside Hospital. The staff is absolutely amazing and they are extremely dedicated.) It was through them that I finally secured the prescription for Truvada (the PrEP medication).

The physician from the Hope Center filed an appeal with the insurance company. Denied.

I received two denial notices from CVS/Caremark on the same day: Notice of Denial and Denial of Appeal. The only reason provided was this - “Truvada is not a covered medication.”

After a few days of trying to figure out how to handle the denials I contacted the New York State advocacy group named in the denial letters. They tried to be helpful, but honestly, it wasn’t worth the time. They freely admitted that they would be unable to help and guided me toward programs designed for persons with lower incomes. Their plan being that I could just get the prescription filled and have a program pay for the entire retail cost. However, I knew I wouldn’t qualify (I earn too much to qualify, but nowhere near enough to pay for the prescription myself).

Since the denial letter stated that Truvada was not covered by the plan, I decided to contact my Human Resources department. They were very, very professional (a bit surprising since we are a small company and tend to be overly familiar with each other). I did not have to explain the whole story (though I was more than willing too). Instead I merely explained that a prescription had been denied.

Within an hour - literally - they had contacted the plan administrator who called CVS/Caremark and the denial was transformed into an approval. I received a telephone call from the retail pharmacy to let me know that the prescription was ready for pick up.

So now it has been about twenty days that I’m on the PrEP protocol. I take the medication every morning (on an empty stomach – I’m not a breakfast person). And yet, no side effects – except one: I no longer have the deep seated anxiety I would have after a sexual encounter. And, since my anxiety was generalized, I would feel anxious even after a sexual encounter that didn’t involve any unsafe activity.

In time, with continued perseverance, it is actually possible that this protocol may restore some sanity to my mind and heart.
Posted by NewPrevTech at 2:05 PM