Truvada can prevent HIV. So why are so few gay men taking it? - via OUT

by Tim Murphy, for OUT Magazine 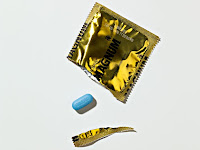 The gay 40-something well-known New York City doctor with many gay patients — let’s call him Dr. John — can barely talk freely about what he’s doing. “It’s telling, how reluctant I am to talk about this, even anonymously,” he says. “This isn’t being talked about in our community at all.”

The subject causing such anxiety for Dr. John is an oval blue pill called Truvada. He takes it once a day — not to treat HIV, but to keep him from getting it. It’s even covered by his insurance, thanks to a decision by the FDA last year to approve it as a prophylactic against HIV. That approval followed a groundbreaking study in 2010, called iPrEx, that found that HIV-negative gay men who faithfully adhered to a one-a-day regimen of Truvada reduced their risk of getting HIV by more than 99%.

Those findings, which HIV specialists had been keenly awaiting for several years, were enough to make Dr. John talk to his own doctor and start the regimen himself. “I don’t want to become HIV-positive,” he says. “But I don’t love using condoms.” Sexually active with multiple partners, Dr. John admits he avoided condoms about 20% of the time. He was tired of stressing constantly over whether he’d gotten HIV. “Even if my sex was relatively safe, I would have long periods where I’d be freaked out that something had happened.”

Since he started taking daily Truvada, or PrEP (pre-exposure prophylaxis), as the regimen is called, Dr. John has remained HIV-negative and has experienced no side effects from the drug. “My sex life has been much less anxiety-provoking,” he says. “Now if I don’t use a condom, I feel like there’s a safety net.”

So why isn’t he shouting about PrEP from the rooftops? Partly, he says, because he doesn’t want people to think that because he’s a doctor, he’s endorsing PrEP for everyone: “There’s a difference between giving medical advice and making individual choices.”

But his reluctance is deeper than that. He also doesn’t want to be judged for eschewing condoms from time to time. “Gay men talking about not using condoms is really stigmatized,” he says. “Most of us have never known sex without condoms or without threat of a ‘deadly disease.’ ” But he adds passionately, “I think it’s a lot to ask an entire generation of gay men to use condoms forever.”

RESEARCH OPPORTUNITY FOR YOUNG GAY MEN IN THE U.S.

Are you a young gay man living in the United States between the ages of 15 and 17? Are you interested in new methods of preventing HIV, like PrEP?

Project PrEPare is an innovative HIV prevention study designed to explore the safety, acceptability and feasibility of PrEP among young gay men and other men who have sex with men who are at risk for HIV infection in the United States.

The study is taking place at clinical sites across the U.S. in Los Angeles, Philadelphia, Chicago, New Orleans, Boston and Denver. Click here to quickly check if you are eligible to participate.

More information about the study and city-specific contact information can be found on the Project PrEPare website.
Posted by NewPrevTech at 10:19 AM