On April 5, 2013 I took my first dose of Truvada as pre-exposure prophylaxis (PrEP). I won’t deny it. I’ve been feeling very conflicted about starting PrEP. 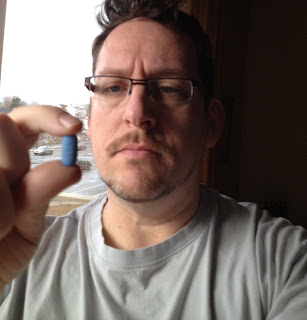 So what HAVE I done to deserve access to PrEP? Well, a lot of it is sheer luck, actually.

•    Nearly every time I see the news, I am amazed at how lucky I am. I was born in Canada. Talk about winning the lottery. Out of 7 billion people, I am one of only 34 million people living in Canada. Trust me, it’s a great place to live!

•    I’ve been working in HIV for 20 years, including the last 10 years focussed on tracking biomedical HIV prevention research. This provides me with ongoing access to the latest information.

•    I make a good living. I can access healthcare relatively easily and generally for free or at a cost that has little impact on my standard of living.

•    I have a doctor. He’s young (My age. That’s young. Shut up.), gay, and sees a lot of people living with HIV in his practice. So talking to him about my sex life and about PrEP was not difficult. He keeps up to date on research. After a good discussion, he agreed to prescribe PrEP. 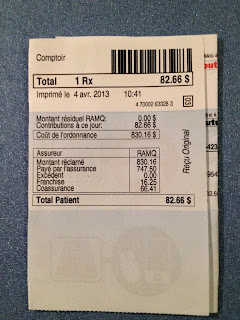 •    Not only do I live in Canada, but I live in Québec, the only province to have a universal public drug plan. As long as the drugs my doctor prescribes are on the provincial drug formulary, I am covered for most of the cost. I pay $500 into the drug plan annually, and PrEP will cost me less than $1,000/year on top of that. And if I ever need other drugs for any reason, I will not pay for them. Because $992/year ($82.66/month to be precise) is the most I would have to pay for all my drugs combined.

I’m not trying to be disingenuous. I know that beyond being lucky and privileged, I have access to PrEP because I’ve taken some very concrete steps as well. I did lots of introspection. I tried to reduce my risk as much as possible through other means. I did a lot of research. I actively sought out access. I make sure I’m very diligent about taking my pills.

I always have been very diligent about that. I take all my antibiotics when I need them. I take vitamins daily. When I was on antidepressants, I never missed a dose in 1.5 years. I follow advice from medical professionals to the letter. Case in point: I’ve needed physiotherapy twice. Both times, the conversation during my second visit went something like this:


I might make jokes, but I don’t take this lightly.

Every morning when I wake up it’s the first thing I think about. That might stop after a while. But 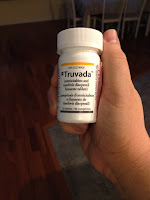 two weeks into taking PrEP, it’s the same thing. I wake up, and as I ponder about whether I want to go back to sleep again for a little longer, I can’t do it. I immediately think: when I get up I have to take my Truvada pill. Because I’m at risk of HIV.

Each and every time I open the cupboard and grab the bottle, I think: how is it possible that I am so lucky to have such easy access to this medication when millions of people who need it to stay alive don’t have access?

Who needs a coffee? I get a slap in my face every morning. Two of them in fact.

*SLAP* You’re at risk of HIV and STIs!


*SLAP* You’re one of the lucky few who has access to this medication and to this prevention option!


I’ve been told that I can look forward to a tremendous reduction in stress and anxiety about seroconverting. I look forward to that. We’ll see. I’m not there yet by any stretch. But at least I get some measure of comfort from knowing that I’m putting chances on my side by reducing my risk as much as I can in my current situation. Doing my best to stay healthy seems like the right thing to do to honour those who don’t have access to this drug.

Len and Jake are so friggin’ smart and insightful and articulate, I want to marry both of them. It has been a tremendous source of help and support to read the thoughts of everyone who shared their stories publicly. A big hairy thanks to Jim Pickett for starting the “My PrEP Experience” blog because he recognized that amidst all the heated debates and discussions and policy decisions about PrEP, we weren’t hearing the voices of real-life flesh-and-blood people actually using PrEP.

Posted by NewPrevTech at 6:00 AM