Joel - "I was still scared, but something funny happened..."

Here I am taking PrEP on a daily basis. I will admit I have become more open to sex without condoms. My fears still linger and I am trying to work through them.

I have been diagnosed with STIs. When I was using condoms consistently that was never the case.

But I am HIV free. 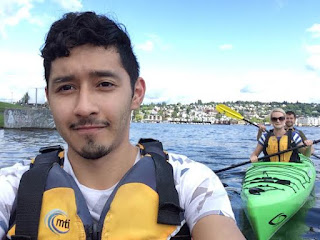 It’s been one year since I have started taking the FDA approved pill called Truvada for HIV prevention. The only sanctioned medicine (aka PrEP or pre-exposure prophylaxis) that prevents HIV infection, Not even condoms are approved by the FDA to prevent HIV.

I have not been infected or diagnosed with HIV. I take cyclical STI exams with my doctor. Because of my paranoia I go every month and a half.

When I started to accept that I liked men at 16, I also acquired a deep sense of fear over HIV. Any sexual interaction was meet with condom inspections after intercourse. I was “safe” 100% of the time. Condom usage if done correctly is between 70-97% effective in preventing infection. Those numbers constantly created anxiety. I’d be anxious about the previous night’s blow job and run to my local HIV testing center when class was over.

Men who were HIV positive, I’d shun and turn away. My fear was so deep I could barely kiss them without thinking about the terrorist virus within their bodies.


I was scared of them. I didn’t want to become them, but my thoughts haunted me, chanting “not positive yet.”

I called the emergency line at my school’s mental help hotline. I was having an anxiety attack locked up in a dorm bathroom. The man on the line managed to calm me down and told me to explain the situation to my doctor the next morning. What had passed had passed.

The next day I told my doctor about the situation and collected samples of my bodily fluids. He also told me about PEP (post-exposure prophylaxis), a course of HIV meds taken for a month after a potential exposure that could prevent me from acquiring HIV if taken within a 72 hour window period after exposure. He gave me the prescription and sent me away. My results came back negative.

The next two years I took PEP three times. Once, with a stranger where there was a condom break. Twice with my ex, my intimacy only seemed to spur paranoia. I am sexually active, my numbers are pretty high. I crave the flesh of another man, but fear is high. I enjoyed sex without condoms, but the thought of HIV always deterred me and sent me into an anxiety driven state.

So I continued educating myself about HIV. Read studies about this new prevention strategy called PrEP. If there was a post-exposure medication, what about pre-exposure? I discussed it with my doctor and he managed to get it approved for me considering the amount of accidents I had reported to him.

The perfect time too, since I had just broken up with my ex, and I knew my behavior would be more promiscuous considering my alcohol induced sexual splurges to help qualm the pain.


For nearly a month I had bowel issues. Not a great start, but it did help quell anxiety. If taken every day there was a very high chance (upwards of 90%) I would not be infected with HIV, and that was if the other person was POZ had a detectable viral load. If they were undetectable the chances were less than one percent. So I dated a man who was HIV positive, undetectable. We had sex, without condoms, and it was terrifying. He assured me I would be okay, he was very well acquainted with the drug and knew members of the community who were experts on the matter.

But it was hard to be intimate with him. I was still scared, but something funny happened.


I began to see him less as a bogey man, and more of a human being. He had HIV, but he was perfectly healthy. Just like me he took one pill a day. Essentially I was living his life, but taking a pill to prevent the virus from attaching itself to me. While he was taking it to keep viral loads levels low. Every morning before work, we would both take the pill and head off.

I still deal with my fear of HIV, but I don’t see it as a death sentence anymore. I’ve become more open to the idea of dating POZ men. From time to time I still cringe at the idea the pill might be a farce, a conspiracy to infect gay men with false hope. People on hookup apps call me a Truvada whore whenever I put I am on PrEP. Oftentimes, they are HIV+ themselves.

There lies the root of the problem, shame. The same people in our community have issues with the morality of the pill. Just as the right has issues with birth control and the HPV vaccine. It will only promote more whoredom they say. Men who said they were not at risk, contracted it, now spout the “condoms only” argument.

Deep down I was ashamed of pleasure. The pleasure of another man, flesh to flesh. Intimacy issues ensnared into bodily behaviors.


Yet, I was still going about my business sleeping around. The fear of HIV lies in the fear of another stigma, a deserved stigma by the larger sect of society on gay men. The zeitgeist being a just punishment for their immoral behavior. It was only a matter of when. I was still ashamed of being gay and liking men. That’s where my fear manifested from, I was ashamed of being gay and feared I deserved to contract HIV and die.

Hopefully in my lifetime there will be a vaccine for HIV. Until then this is the next best thing, a once a day pill. Even if you use condoms all the time, there will be slip ups, God knows I never planned for one. You fall for someone and trust them and have unprotected sex. Boom, you’re infected that is how my ex who is HIV+ contracted it. Statistically most HIV infections occur from people you know and trust.

Humans are emotional animals, they seek pleasure and sometimes in the heat of the moment we don’t make intelligent decisions. Taking PreP has not only prevented me from getting an infection, but it has humanized those who do have it.


I doubt I would ever have had sex with a POZ man before PrEP. It’s actually safer, considering men who say they are negative oftentimes don’t know their status and their viral levels are dangerously high. While POZ men who know their status and are on treatment can have undetectable levels.

You always roll the dice when you hook up or date someone. If someone infected you one day, and the next week you went to the doctor for a check up it would likely not show up in your results.

So go and get yourself checked, ask about PrEP and see if it’s right for you. Or at the very least have a PEP kit available in case an accident occurs. Protect yourself, its time to be an AIDS free generation. If you have any questions, comments, or concerns regarding PrEP I am happy to answer and regale you with my own perspective.

[If you want to connect with Joel, find him on Twitter @joelalcaraz92]

Posted by NewPrevTech at 4:19 PM